Team Germany took the first step on the road to their 24th team title when Dorothee Schneider and Jessica von Bredow-Werndl posted the two best scores on the opening day of the Longines FEI Dressage European Championships 2019 in Rotterdam, The Netherlands today.

Von Bredow-Werndl’s 76.894 with TSF Dalera BB topped the leaderboard until the closing stages when Schneider overtook her with a mark of 80.233 for a fabulous test with Showtime FRH. And with team-mates Sonke Rothenberger riding Cosmo and the legendary Isabell Werth riding Bella Rose still to come when the competition resumes tomorrow, it seems the destiny of gold is all but already assured. 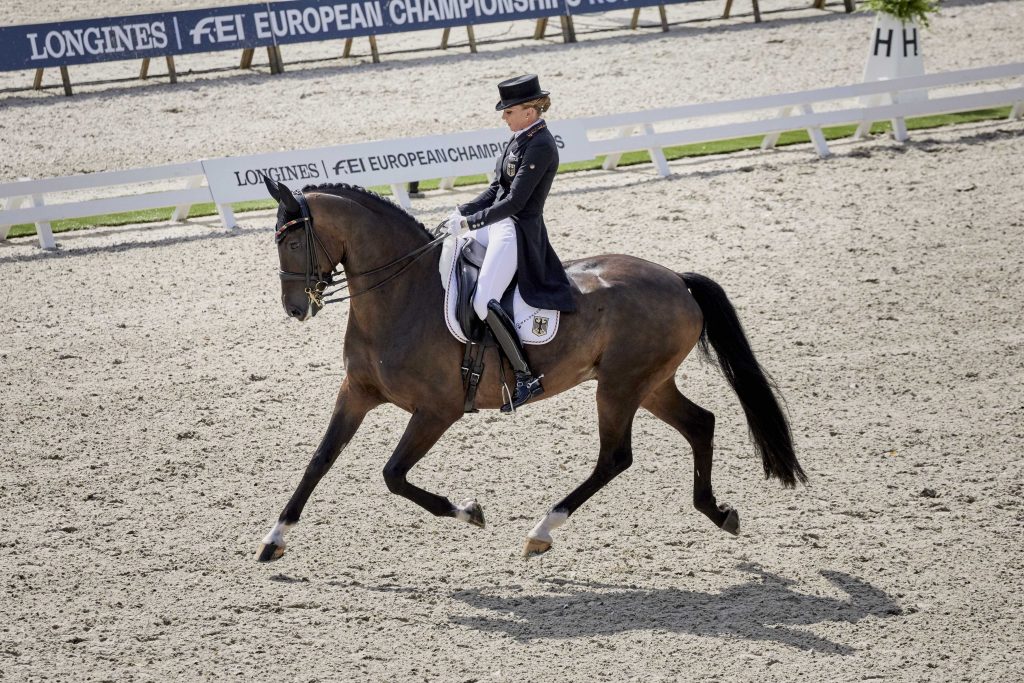 “I’m very happy to be in this team, I’m proud to be here and I’m very happy with my test!” said double-Olympian Schneider. Talking about her horse’s performance she said there were “some very, very good parts, and in other parts he was a bit nervous, but altogether I am happy to have this result for the team and to be here and to have a fit horse!” she added.

That’s because the 13-year-old gelding with which she won team gold at the Rio 2016  Olympic Games is making a very significant comeback.

“Showtime was two years out, but at the beginning of this year we started him again and he’s getting better and better – in his concentration he was very good at the  German Championships (in June) and he was very, very good in Aachen (in July) so it’s very emotional for me to have this horse under me again, and to feel how motivated he is!” she explained.

A superb personal-best Grand Prix score of 76.351 from Gareth Hughes with Classic Briolinca helped put Great Britain into silver-medal-spot going into the second day. “I couldn’t be happier!” he said at this evening’s press conference.

“She’s had her injuries as well, she’s had a stop-start career at Grand Prix so she’s still quite inexperienced, but we’ve had a good season up to this. She suffers sometimes from nerves, she’s usually not very good at halting or walking, but today she was excellent, she was focused so I just had to point, keep her head up and use my leg when I needed to, and she took care of the rest!” said the rider who was a member of Britain’s silver-medal-winning team at the FEI World Equestrian Games™ 2014 in Caen, France.

His compatriot, 23-year-old Charlotte Fry, produced a stunning senior championship debut to put 74.317 on the board with Dark Legend earlier in the day, and Hughes said, “Lottie did a great job, her first championship and she’s so young, she has nerves of steel….she’s another Charlotte (Dujardin)! She laid down a really good score to start with, and that always gives the second rider confidence. It’s a long day to hang around and wait, it’s a big build-up to going into the arena but we’re in a good position, and now it’s up to the two famous Brits to come out tomorrow and show what they can do!” he pointed out, referring to the remaining two British team members Charlotte Dujardin and Carl Hester.

And Sweden lies third going into the second day of action following a 74.224 for pathfinders Antonia Ramel with Brother de Jeu and 75.466 from Therese Nilshagen riding Dante Weltino OLD. This leaves Nilshagen in individual fourth spot behind Hughes, “but I’m not super-happy with my own ride today because I made a very big mistake in the one-tempis” she said. “I think I must have done something wrong, and that cost us a lot of points and that’s a pity….but the rest was quite good and I hope that my team-mates will be much better than I was so we’ll see!” she added this evening.

It’s still all very much to play for, with The Netherlands lying a close fourth ahead of Denmark in fifth, Portugal in sixth, Switzerland in seventh, Spain in eighth and Russia in ninth place. And apart from the European medals up for grabs there is massive tension between the countries as yet not qualified for the Tokyo 2020 Olympic Games who are battling for the three places on offer in this European team contest.

Chasing down those three spots are Denmark, Portugal and Switzerland along with Ireland, France, Austria, Belgium and Finland – the latter five nations holding 10th to 14th places on the team leaderboard going into tomorrow’s medal-deciding second-half of the competition. A total of 15 nations started today but the three-member side from Luxembourg are now out of contention after elimination for their pathfinder, Nicolas Wagner (Quater Back Junior).