Canada came out on top in a tight battle with the USA when the Team Dressage medals were decided today at the Pan American Games 2019 taking place at the Army Equitation School at La Molina in Lima, Peru. The three-member US side had a fractional advantage after yesterday’s opening competitions, but consistently strong performances from the Canadian crew today saw the defending champions having to settle for silver in the final analysis, while Brazil stood on the third step of the medal podium.

This was Canada’s third time to take the team title in the 68-year history of equestrian sport at the Pan Americans, their first victory posted in Cali, Colombia in 1971 and their second in Havana, Cuba in 1991. 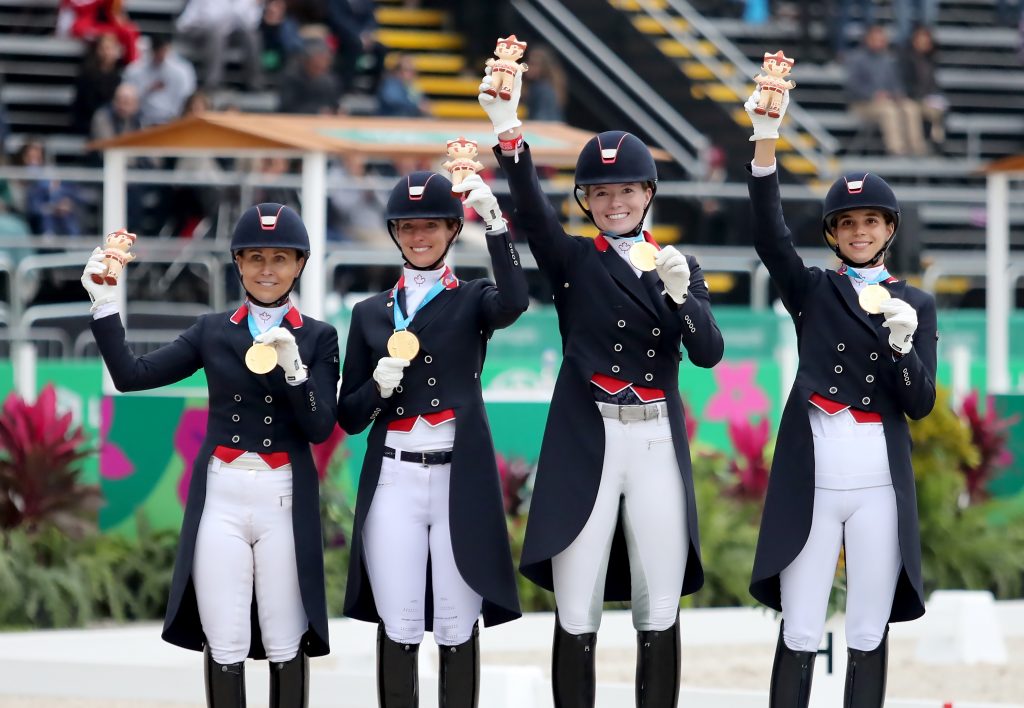 The Pan Am format sees team members compete at both Small Tour and Big Tour level, and Team USA, already qualified for the Tokyo 2020 Olympic Games following their silver-medal-winning performance at the FEI World Equestrian Games™ 2018 on home ground in Tryon, sent an all-Small-Tour side of just three horse-and-rider combinations. Canada fielded two Small Tour and two Big Tour partnerships, and when Lindsay Kellock (Floratina), Tina Irwin (Laurencio) and Naima Moreira Laliberté (Statesman) all posted scores of 73 percent, their final tally of 440.111 left them 2.32 points ahead of USA in silver and over 31 points clear of the Brazilians in bronze. Fourth team member Jill Irving (Degas 12) provided Canada’s discard score when the top three results for each team were counted.

Canada’s star performer was 22-year-old Moreira Laliberté, daughter of Cirque du Soleil founder Guy Laliberté, who won both yesterday’s Grand Prix and today’s Grand Prix Special with her 12-year-old Sandro Hit gelding, Statesman. “This is my first year of Grand Prix, my sixth competition at this level and my first major Games” said the talented rider. Irving is also a Big Tour contender, and the 56-year-old steered her WEG 2018 ride, the 17-year-old Hanoverian gelding Degas 12, into third behind her team-mate.

In the Small Tour Intermediate 1 today, Irwin and Kellock finished second and third. This is Irwin’s second Pan Am Games, having helped her country to team silver in Guadalajara (MEX) in 2011. The 38-year-old rider and her 12-year-old gelding Laurencio are Small Tour stars, setting a world record at that level in 2017 before moving up to Big Tour. However they moved back down to Small Tour this year with the specific goal of helping Canada earn their spot at the Tokyo 2020 Olympics, and it has worked a treat. “The whole team gave it our all today. Yesterday it was close behind the Americans, and today we were on our “A” game!” Irwin said.

Kellock and her 11-year-old Hanoverian, Floratina, are a relatively new combination who clicked from the moment they came together. The mare was bought as a schoolmaster for a friend who couldn’t find the time to ride her as much as she would like, so loaned her to Kellock who got a really high score with her on their first outing and they have blossomed from there. “The next goal in our minds is Tokyo, we all three have horses that are aimed at that!” said the ambitious 29-year-old.

Irwin and Kellock finished second and third on the Individual leaderboard ahead of Wednesday’s Individual Final in which the top 50% in the rankings from both the Big and Small Tour competitions will battle it out in the Grand Prix Freestyle and Intermediate 1 Freestyle for the Individual Pan American Dressage title, and in which everyone starts from scratch.

Team USA’s Sarah Lockman topped the leaderboard tonight with her lovely nine-year-old Dutch-bred stallion, First Apple, who won both yesterday’s Prix St Georges and today’s Intermediate 1. After accepting her team silver medal alongside compatriots Nora Batchelder (Faro SQF) and Jennifer Baumert (Handsome), Lockman said her Pan Am experience so far has given her “a feeling like no other! It’s my first time to represent the US and it’s such a different feeling for us, as sport is for the most part an individual sport. This (the team competition) has brought a different element and I love it, it’s amazing seeing our flag raised, it’s definitely a rush and something I will never forget!” she added proudly.

And the experienced bronze-medal-winning Brazilian side of Joao Paulo Dos Santos (Carthago Comando SN), Joao Victor Marcari Oliva (Biso das Lezirias), Leandro Aparecide Da Silva (Dicaprio) and Pedro Manuel Tavares de Almeida (Aoleo) also have ever reason to be pleased as they, like the winning Canadians, are now Tokyo-bound. Oliva said “we are very happy with this qualification, we came here for this, we trained for this, so thank you to my team mates and to everybody who is behind us. Now we have to celebrate!”

This website uses cookies to improve your experience while you navigate through the website. Out of these, the cookies that are categorized as necessary are stored on your browser as they are essential for the working of basic functionalities of the website. We also use third-party cookies that help us analyze and understand how you use this website. These cookies will be stored in your browser only with your consent. You also have the option to opt-out of these cookies. But opting out of some of these cookies may affect your browsing experience.
Necessary Always Enabled

Performance cookies are used to understand and analyze the key performance indexes of the website which helps in delivering a better user experience for the visitors.

Analytical cookies are used to understand how visitors interact with the website. These cookies help provide information on metrics the number of visitors, bounce rate, traffic source, etc.

Advertisement cookies are used to provide visitors with relevant ads and marketing campaigns. These cookies track visitors across websites and collect information to provide customized ads.

Other uncategorized cookies are those that are being analyzed and have not been classified into a category as yet.