All four members of the history-making Danish side that won team gold at the ECCO FEI World Championships 2022 in Herning, Denmark this summer will line out next weekend when the FEI Dressage World Cup™ 2022/2023 Western European League gets underway, again on their home ground but this time in Aarhus, Vilhelmsborg (DEN).

Nanna Merrald Rasmussen, Carina Cassøe Krüth, Daniel Bachmann Andersen and Cathrine Laudrup-Dufour arrived as favourites to take the team title in August, but were pushed every inch of the way by the powerful British and German sides that had to settle for silver and bronze. It was an enormous achievement for the Danes who only once before took a world championship podium placing when clinching bronze in Lausanne (SUI) in 1982. And Laudrup-Dufour’s silver-medal-winning double in the Grand Prix Special and Freestyle this summer was the icing on the cake. 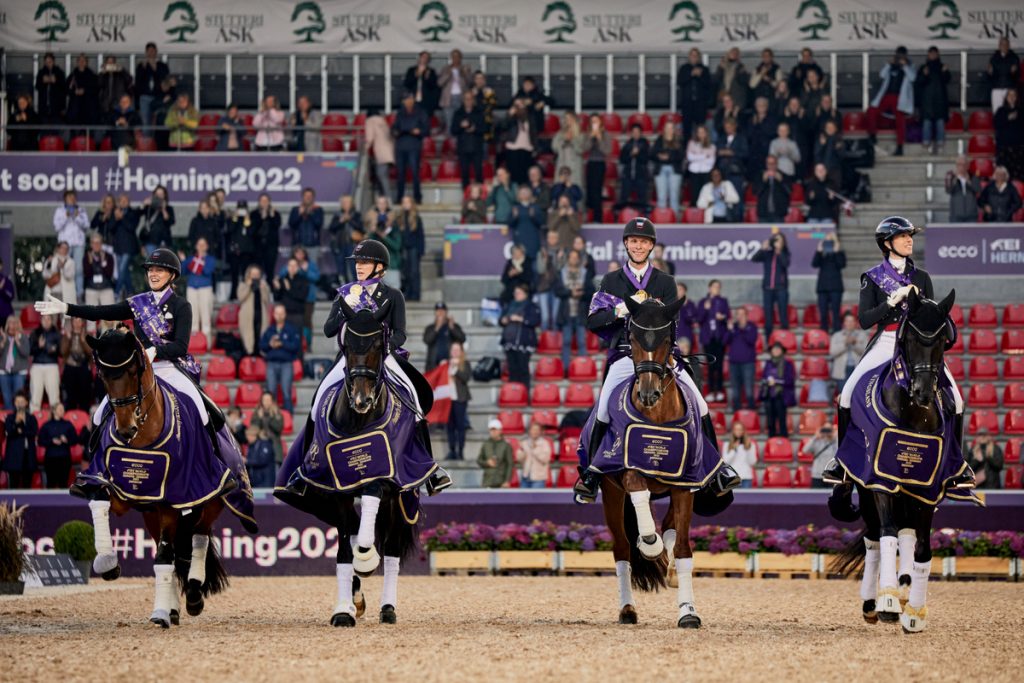 With the new World Ranking system now in place for both Jumping and Dressage, Laudrup-Dufour is lying second on the current Dressage Athlete ranking list while Cassøe Krüth is in fifth and Merrald Rasmussen and Bachmann Andersen hold tenth and eleventh places respectively. Next weekend Cassøe Krüth will partner her Herning ride Heiline’s Danciera who lies fifth on the latest Dressage Horse ranking list.

Athletes from seven nations – Belgium, Denmark, Finland, Germany, Morocco, Netherlands, Norway and Sweden – will compete in the Short Grand Prix on Saturday 22 October from which the top 15 will qualify for Sunday’s points-deciding Freestyle.

The Danes may be a tough bunch to beat however because Laudrup-Dufour will partner her Tokyo 2020 Olympic ride Bohemian, the 12-year-old gelding with which she claimed Team and Grand Prix Special bronze and Freestyle silver at the FEI Dressage European Championships 2021 in Hagen (GER) last September.

And adding more fuel to the Danish fire will be double-Olympian Andreas Helgstrand with the exciting 8-year-old stallion Jovian who won the 7-year-old title at the World Breeding Championships last year before posting a double of CDI3* wins in Aalborg (DEN) in May, another double at CDI3* Hagen (GER) in June and fifth and fourth places in the Grand Prix and Special at the CDI4* in Aachen (GER) later that month.

This pair are definitely ones to look out for when the action kicks off, and with Anna Kasprzak and Lone Bang Zindorff also in the mix, the Danish contingent are a real force to be reckoned with this weekend.

However they may not have it all their own way because Germany will be represented by Helen Langehanenberg and Dorothee Schneider who have a world of experience and success behind them, and two great horses.

Langehanenberg was on the silver-medal-winning German team and finished individually fourth at the London 2012 Olympic Games with the stallion Damon Hill who she then went on steer to victory at the FEI Dressage World Cup™ Final a year later. She brings the 14-year-old mare Annabelle, who finished sixth in both the Short Grand Prix and Freestyle at the FEI Dressage World Cup™ 2022 Final in Leipzig (GER) in April, to Aarhus this week while Schneider, a double-Olympic team champion, will partner the 14-year-old gelding Faustus who, like Annabelle, competed on the gold-medal-winning German team at last year’s FEI Dressage European Championship and who has been a prolific winner this season at CDI3* and CDI4* level.

Aarhus is the first stop in the 12-leg FEI Dressage World Cup™ 2022/2023 Western European League that continues at Lyon (FRA) the following weekend before moving on to Stuttgart (GER) and Madrid (ESP) in November and then Salzburg (AUT), London (GBR) and Mechelen (BEL) in December.

The action will resume at Basel, St Jakobshalle (SUI) and Amsterdam (NED) in January 2023, and following legs in Neumünster (GER) and Gothenburg (SWE) in February the twelfth and final qualifier will take place in ’s-Hertogenbosch (NED) in March.

The top 9 finishers in the League will qualify for the 2023 Final along with the defending champion, Germany’s Jessica von Bredow-Werndl, who is automatically qualified provided she competes twice during the season.

The Final returns to Omaha (USA) from 4 to 8 April, where her compatriot and five-time champion – the legendary Isabell Werth – reigned supreme on the only other occasion it was staged there in 2017.

The story of the 2022/2023 season will begin to unfold when the action gets underway on Saturday with the Short Grand Prix which starts at 19.00 local time followed by Sunday’s Grand Prix Freestyle which will kick off at 13.30. It’s going to be another super season so don’t miss a hoofbeat…..

Check it all out here