Wellington opener comes down to an all-female showdown

The 2020 series got off to a galloping start with a home victory for Team USA in the Longines FEI Jumping Nations Cup™ of United States of America at Deeridge Farm in Wellington, Florida (USA) today. But despite fielding a crack four-member side, the hosts were pushed to a third-round jump-off by a relatively rookie British team that consisted of just three riders.

And making today’s competition all the more exceptional was the fact that, in this sport in which men outnumber women by a considerable margin at top level, it came down to a clash between two all-female teams, with America’s Beezie Madden pipping Britain’s Alexandra Thornton in the third-round tie-breaker.

“The British girls were excellent!” said double Olympic gold medallist Madden who piled on the pressure with a brilliant first-to go run with Darry Lou in the jump-off. 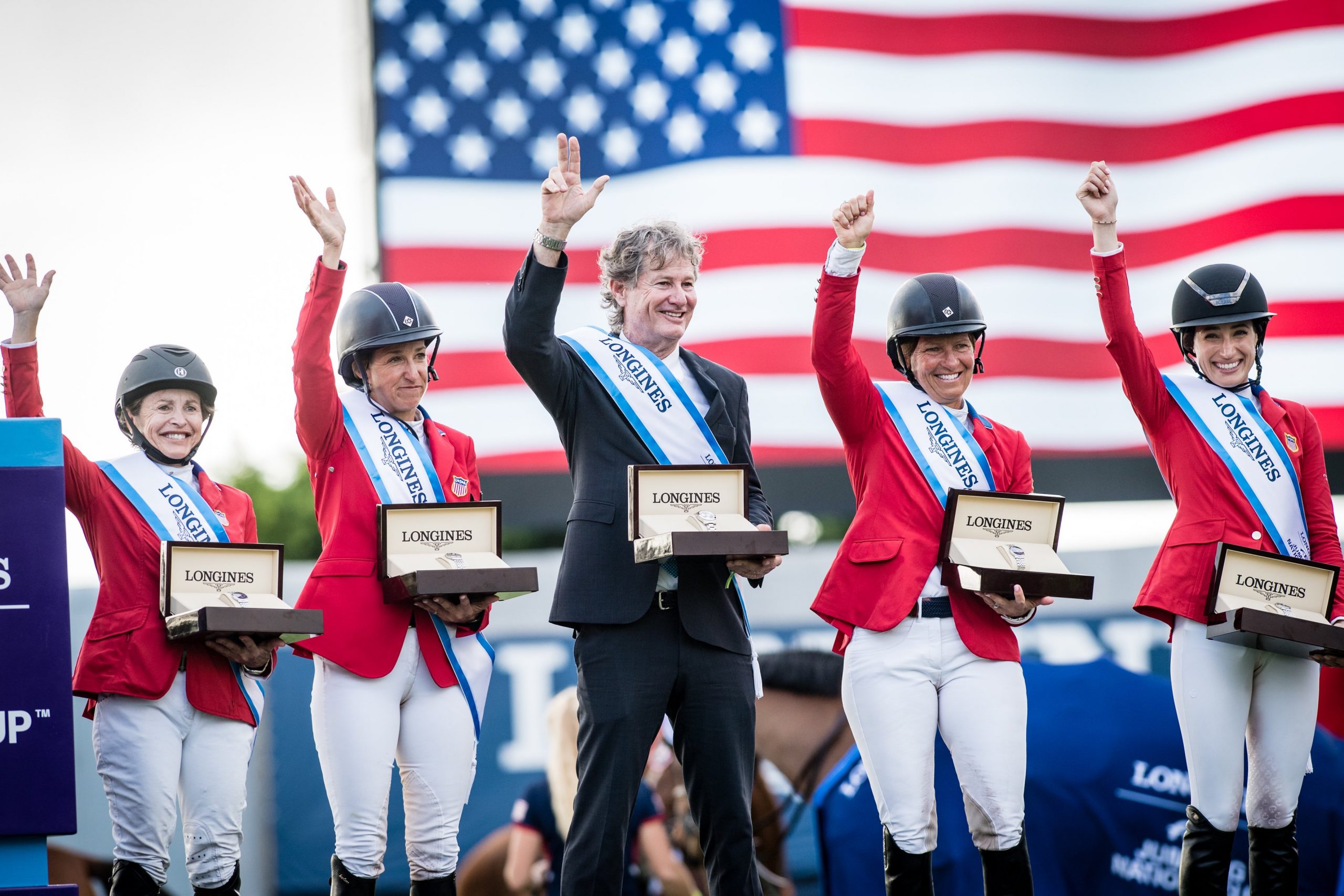 There were eight teams in action but only USA, Mexico and Canada were chasing down qualifying points in the North and Central America and Caribbean League series from which two of those three countries will qualify for the Longines FEI Jumping Nations Cup™ 2020 Final in Barcelona, Spain next October. Today’s American winners claimed the maximum 100 points while Mexico collected 80 when lining up third and Canada picked up 60 points when finishing fourth in a competition filled with plenty of excitement.

The open water was the source of the greatest drama, Israel’s Ashlee Bond having to call it a day with Donatello in the second round when the nine-year-old gelding refused to have anything to do with it after giving himself a fright first time out. And Brazilian pathfinder, Cassio Rivetti, took a real soaking there when his 13-year-old mare, Bacara d’Archonfosse, dumped him in it at their second attempt.

Meanwhile there were impressive firsts for both Canadian 17-year-old Sam Walker (Kelstar du Vingt Ponts) and 22-year-old Israeli rider Teddy Vlock (Volnay du Boisdeville) who collected just four faults in each round on their Nations Cups debut. Israel and Ireland finished joint-fifth while Australia and Brazil shared seventh place at the end of a very eventful afternoon.

Team Ireland, series champions in 2019, shared the lead with Great Britain on just four faults at the end of the first round, but the addition of 16 faults second time out put paid to Irish chances. In contrast, despite having no discard score, the British added just four more when anchor rider Amanda Derbyshire (Cornwall BH), who had been fault-free first time out, lowered the bogey second fence after team-mates Thornton (Cornetto K) and Emily Moffit (Winning Good) both kept a clean sheet.

Madden set the pace against the clock with a great run from the 12-year-old Darry Lou who broke the beam in 33.11 seconds.

“He does love to gallop! He’s actually really super to ride, he’s not delicate so you can wind him up a bit and let him off and he rises to the occasion – he’s a lot of fun to ride!” she pointed out this evening.

Thornton and the experienced 14-year-old Cornetto K also put in a perfect run, but crossing the line 36.34 seconds they were well short of Madden’s winning time.  However British showjumping got a big boost today, Di Lampard putting her faith in three US-based riders – 27-year-old Thornton, 21-year-old Moffit and 31-year-old Derbyshire – who didn’t let her down and finished runners-up behind a superstar American selection.

In the lead-up to the Tokyo 2020 Olympic Games when riders are looking to impress there was plenty to see at this opening leg of the 111th Longines FEI Jumping Nations Cup™ season during which this much-loved series will visit 11 top venues around the world en route to the series decider in eight months’ time.

Standings in North and Central America and Caribbean League here