Team Brazil will be first into the arena when the Longines FEI Jumping Nations Cup™ 2022 Final gets underway in Barcelona, Spain tomorrow afternoon.

The draw conducted by Show Director Daniel Giro and and Chair of the FEI Jumping Committee Stephan Ellenbruch took place this evening, and the order-of-go for the 14 competing nations is:

CSIO Barcelona one of the oldest horse shows in the world with a history dating all the way back to 1897, and this year it celebrates its 125th anniversary with the staging of the Longines Final for the ninth consecutive time at the hugely popular Real Club de Polo.

The venue, located in the heart of the city which is the cosmopolitan capital of Spain’s Catalonia region and which is known for its art and architecture including Antoni Gaudí’s fantastical Sagrada Família church, provides the perfect back-drop to the season-closer that gathers the best teams from around the globe for one thrilling final clash.

Going home with the coveted Longines trophy means everything to the athletes who represent their countries with fierce pride, and next Sunday afternoon new champions will be crowned. 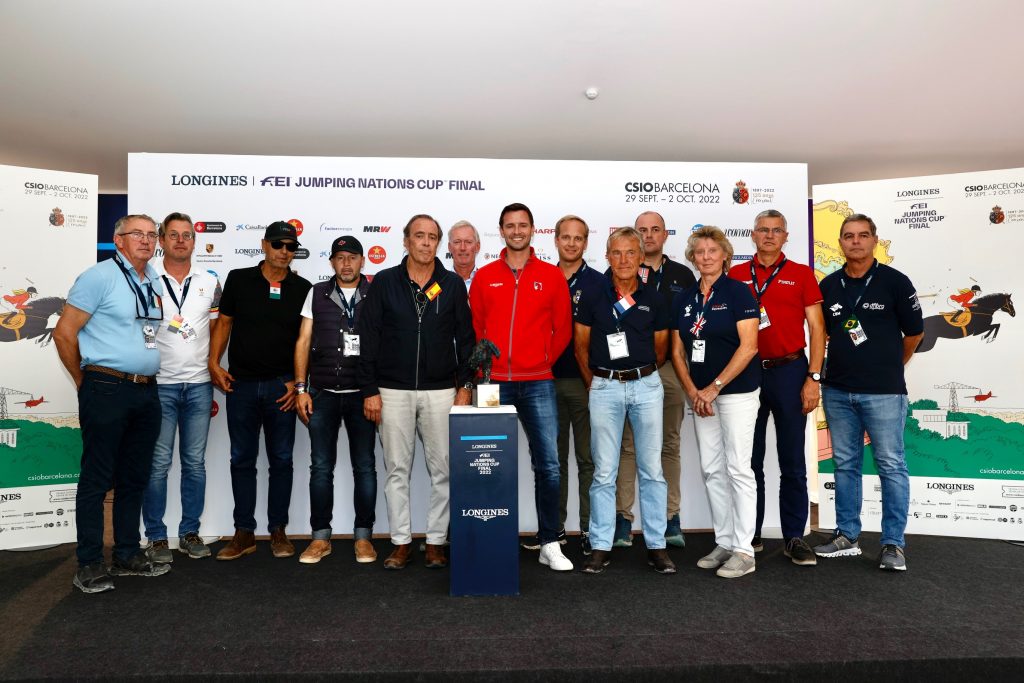 The Chefs d’Equipe at the draw for the order-of-go at the Longines FEI Jumping Nations Cup™ 2022 Final at the Real Club de Polo in Barcelona, Spain this evening. (FEI/Nacho Olano)

What they had to say…

Here’s what some of the Chefs d’Equipe had to say this evening…..

Henk Nooren, France – “all the riders who are selected are always delighted to come here for the Final. We are bringing the same team as we had at the World Championship in Herning (DEN) but we need to see how the form of the horses is because most of them have only jumped one show since Herning so there’s a bit of a question mark but we will see!”

Di Lampard, Great Britain – “the Brits always look forward to coming to Barcelona for the Nations Cup final and we have a group of riders who are very excited to be here. We have Jodie Hall-McAteer, Lily Atwood, Ellen and William Whitaker and Joe Stockdale who is our only rider from the Herning team, so we have to make a choice this evening after they have jumped under lights.”

Otto Becker, Germany – “it’s good to be back here – in my opinion this is the right place for this important Final. In our team we have Jana Wargers, Janne Friederike Meyer-Zimmermann, Andre Thieme, Christian Kukuk and Mario Stevens.”

Michael Blake, Ireland – “we love Barcelona and we are reasonably lucky here normally so we hope we will be lucky, and good, this year! We have a slightly less experienced team, they have experience but have never been to this Final before. We start with Andrew Bourns who has been on a few winning teams this year, then Trevor Breen followed by Jack Ryan and Mark McAuley. We are looking forward to good sport and wish everyone else the best of luck, and thank you to the show organisers here in Barcelona for having us!”

Jos Lansink, The Netherlands – “we also are very happy to be here. We have three riders from the team who were second in Herning – Michael van der Vleuten, Harrie Smolders and Jur Vrieling – and we have a new team member Johnny Pals. They are all in good shape so we will do our best and we wish everyone good luck!”

Mikael Kolind, Norway – “thank you for the invitation to come here. We have four riders, the first out is Maria Longem, then Marit Skollerud, Therese Henriksen and Cecilia Hatteland. Three of them were also in Herning so we look forward to the competition over the next few days”.

Michel Sorg, Switzerland – “thank you for welcoming us at this beautiful show again. We have four of our riders from the World Championship – Martin Fuchs, Steve Guerdat, Pius Schwizer and Edouard Schmitz and we also have Niklaus Rutschi with us.”

Henrik Ankarcrona, Sweden – “we are excited to be here and happy to be here because we were struggling a bit, but now we are here with a team of the future I hope – Irma Karlsson, Evelina Tovek, Stephanie Holmen, Wilma Hellstrom and Linda Heed. We will try out best.”

Mark Laskin, Mexico – “I want to thank Daniel (Giro) and the organising committee, the FEI and Longines for putting on the Final here in Barcelona which we are always very excited to attend. My team this year is starting with Nico Pizarro, Andres Azcarraga, Fernando Martinez, Manuel Gonzalez and Carlos Hank. Win lose or draw I promise that Mexico will bring positive energy and competitive spirit to the event!”

Eric Lamaze, Canada – “Team Canada is very happy to be here. We brought two not veteran riders but riders with a lot of experience and upcoming young riders who will have a big future. For me Barcelona has fantastic memories, it’s been so kind to Canadians over the years, and it’s a challenging place to come as a rider and now as a Chef. My team will be Beth Underhill, Alicia Gadban, Tim Walks and Rebecca McGoldrick.”

The action gets underway tomorrow with the first qualifying round which is open to all 14 nations, beginning at 14.00 local time. The best eight teams from this round will go through to Sunday’s title-decider while the remaining six nations will battle it out in the Challenge Cup which will take place in an electric atmosphere under lights on Saturday night.

With Olympic course designer Santiago Varela setting the tracks throughout the week the competition is guaranteed to be challenging from the get-go, and the single qualifying spot on offer for the Paris 2024 Olympic Games gives the event an extra cutting edge.