Team Brazil cruised to victory in the Longines FEI Jumping Nations Cup™ of the Netherlands 2019 at Geesteren (NED) today. Taking command with just four faults after the first round, they sealed the result when adding just four more without calling up their final partnership on a day full of surprises and high scores.

The hosts line up second ahead of the Spanish, who pipped Germany for third place by a narrow one-fault margin. Sweden, Belgium and Japan were next in line, separated only by time when all completed with 32 faults on the board, and Austria lined up eighth and last.

This was the perfect boost for Brazil in the lead-up to next month’s Pan-American Games in Lima, Peru. The Europe Division 1 league has provided the perfect preparation for that important Olympic qualifier, and last week they finished sixth in Sopot (POL), while at St Gallen (SUI) in early June and La Baule (FRA) in May they lined up in fifth place each time. Today they had it in the palm of their hands after establishing the early lead and staying rock-solid while those around them struggled to hold on.

The team members all knew that a good result would do their selection chances no harm, and Brazilian Chef d’Equipe Pedro Paulo Lacarda confirmed that this evening.

“They were all amazing today! For the Pan-American Games I still wait one week to confirm my team – but this team have a good chance!” he said. 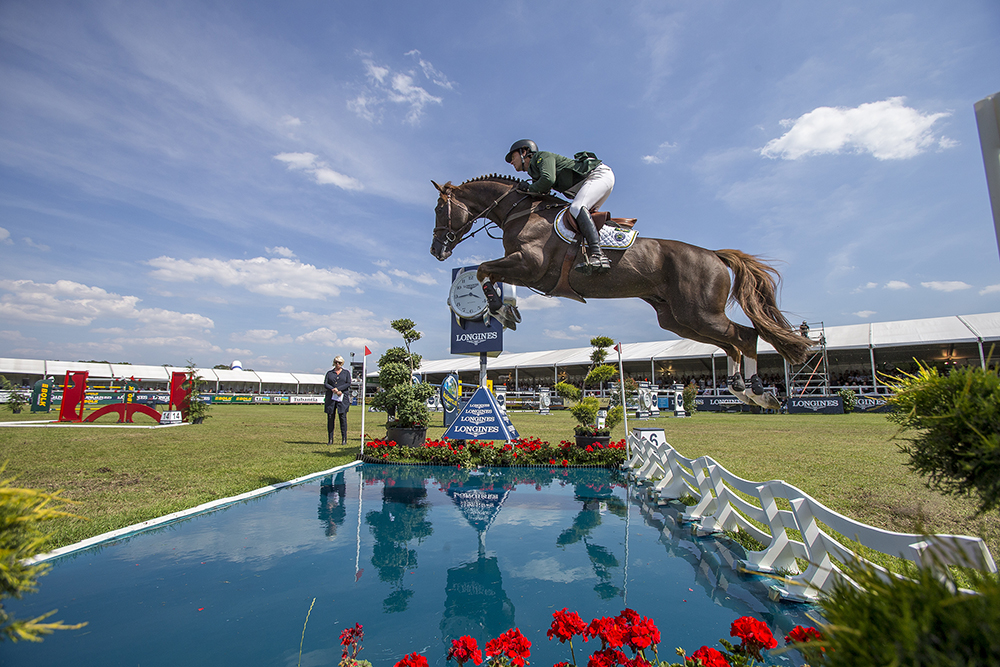 A fascinating track designed by Dutchman Henk Jan Drabbe asked plenty of unusual questions. Sweeping turns, long runs between fences and distances that required absolute accuracy were the undoing of many top horse-and-rider combinations and there was only one double-clear on the day. That came from the second-line Brazilian duo of Felipe Amaral (28) and his 12-year-old stallion Germanico T.

All eyes were on German pathfinders, the 2018 world champions Simone Blum and DSP Alice, but their round came adrift when the stride from the open water at six to the flimsy vertical that followed got muddled, and the mare put down again on take-off. They were perfection second time out, but the German side that looked super-strong on paper completed with 29 faults on the board, while Spain, whose last-line partnership of Alberto Marquez Galobardes and Ucello Massuere were real eye-catchers, finished one fault ahead of them with 28.

As the second round began it looked set for a three-way tussle between Sweden, carrying 12 faults, The Netherlands with eight and the leading Brazilians on just four. But the Swedes slipped out of contention when adding 20 more and when Brazilian pathfinder Marlon Modolo Zanotelli (31) followed up his first-round four faults with a lovely clear and Amaral and Germanico T were foot-perfect for a second time then it already looked like the writing was on the wall.

It was agonising for the Dutch whose second round began with a lovely clear from Maikel van der Vleuten and Dana Blue, winners of Friday’s Longines Grand Prix, only for both Willem Greve with Zypria S and Marc Houtzager and Sterrehof’s Calimero to leave one on the floor. Both looked like they had a fault-free run in the bag but Greve’s mare hit the penultimate oxer, a real bogey on the day, while the crowd groaned in horror when the front pole on the final oxer hit the dirt after Houtzager, certain he had left it in place, raised his fist in delight as he galloped through the finish.

When third-line Brazilian, Pedro Junqueira Muylaert (32), retuned to the arena with C’est Dorijke he knew he could afford a fence down to seal the win and he used that leeway when too strong down to the vertical after the water, but it didn’t matter. The brilliant anchor partnership of Pedro Veniss (36) and the stallion Quabri de L’Isle, who had made it all look very elementary when clear first time out, didn’t need to go again. The top step of the podium was already secured, and when the final Dutch partnership of Jur Vrieling and VDL Glasgow vh Merelsnest retired after lowering three fences then the hosts had to settle for a final tally of 16 faults, well behind the winning team’s eight-fault total.

“I was feeling very confident coming here because we have Marlon and Pedro with Quabri and Sirene on our team, and also I felt my horse was really good in the Grand Prix” said Amaral this evening.  This young man who been twice Brazilian champion and who competed in the Pan-American Games in Toronto (CAN) in 2015, is Belgian-based and has trained with both Rodrigo Pessoa and his legendary father, Nelson Pessoa.

As the Brazilian celebrations began, Pedro Veniss pointed out that team spirit played a major role in today’s success. “We are not just team-mates but also friends. We really support each other to make it happen and winning the biggest class in the world with your best friends is really special!” he said.

Standings after Round 4 of the Longines FEI Jumping Nations Cup™ 2019 Europe Division 1 series: