“We had a task to do, and we did it in style!” said British Chef d’Equipe Di Lampard today after her team posted a superb victory in the Longines FEI Jumping Nations Cup™ of Ireland in Dublin (IRL).

On a thrilling afternoon at the elegant Royal Dublin Society showgrounds, and in front of a packed house of screaming spectators along with dignataries in top-hats and tails, they won by a country mile, counting just a single time fault, and without having to send their final rider into the ring. Italy finished second on a 12-fault total, Ireland collected 16 faults for third and the Swiss, Dutch, Mexicans and Swedes filled the remaining places in that order. 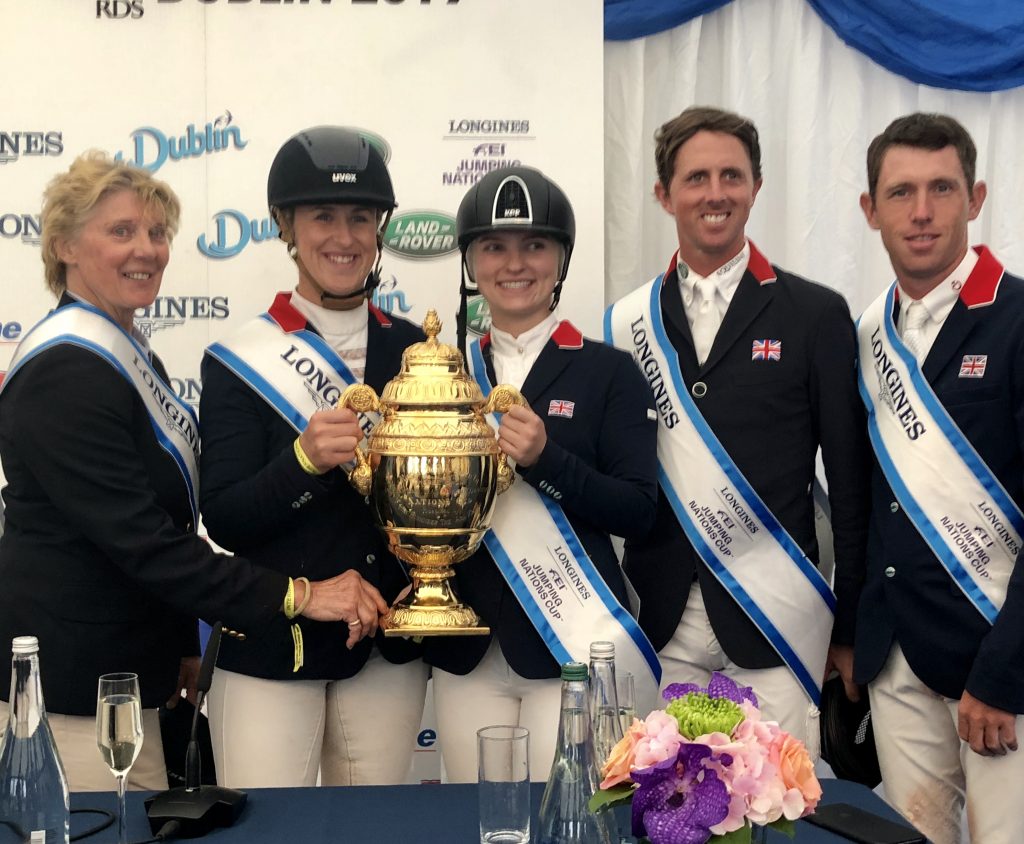 Courses designed by Ireland’s Alan Wade are never for the faint-hearted, and the intense atmosphere, the scale of the arena and the beautifully-created fences also present a formidable challenge at the prestigious Dublin venue. But with their backs to the wall, the nation placed last on the Europe Division 1 table proved that when the chips are down they have what it takes, and today’s result has ensured qualification for the all-important Longines series finale in Barcelona (ESP) in October.

“We’ve ridden the storm this season, we’ve had the downs and the difficulties, but it had to change some time and with a good team and the right spirit I felt it was going to come right this week, and it did!” said Lampard after accepting the coveted Aga Khan Trophy at the prizegiving ceremony attended by The President of Ireland, Michael D. Higgins.

With clears from Scott Brash (Hello Jefferson), Emily Moffitt (Winning Good) and Holly Smith (Hearts Destiny), the mistake by Ben Maher (Concona) at the final element of the penultimate double could be discounted to leave her team clearly in command on a zero score at the halfway stage. Italy went into round two carrying four, followed by the Irish with eight and Switzerland with nine on the board. But once they had a grip on the lead, the British were never going to let go. This was the last leg of the seven-round Division 1 series, so it was all or nothing.

Maher’s inexperienced nine-year-old mare came home with just a single time fault second time out, so when both Brash and Moffitt each produced another foot-perfect run then the game was already up. Not only had they bagged the coveted Aga Khan Cup for their country for the 27th time in the 93-year history of the event, but the 100 points they collected lifted Great Britain up to seventh place on the leaderboard from which the top seven of the 10 competing nations qualify for the €2m finale in Spain.

The other teams to qualify from this league are Switzerland, Italy, Ireland, France, Belgium and Sweden. The three countries that have not made the cut are The Netherlands, Germany and Austria.

“With the win we secure a place in the Barcelona final and we were determined to carry that out – the Aga Khan trophy was always coming home with us!” said Lampard this evening. There’s been something of a generational shift going on in British showjumping.

“Over the last three years we’ve been producing young riders and a larger squad of riders, and you can’t rush these things. They need the right horses and they need owners to stick with them and that all takes time” she explained. The changing of the guard can indeed be a painful process, but today’s result showed that British showjumping is definitely on an upward curve once again.

Moffitt was outstanding, the 21-year-old rider who is trained by team-mate Maher showed great maturity as she steered the hard-pulling Winning Mood through two tough rounds. “He’s very much a fighter, and I have to rein him in a bit!” she explained. Maher was delighted with his student’s performance. “Riding is the easy bit, shouting from the sides is the hard part! Emily did exactly what she was told today so I’m proud of her, and also proud to be part of this team”, he said.

“This is not an easy ring to ride in, I found that out the other day when my horse got a bit spooky!” Brash pointed out, referring to taking a tumble on the first afternoon. But normal order was restored as he cruised through two flawless efforts today with Hello Jefferson. The last British win in Dublin was back in 2013, and both Brash and Maher were in that side along with Robert Smith and the now-retired Nick Skelton.

“It’s a privilege to ride here in Dublin and compete in this – the very best Nations Cup. It’s all down to the crowd really, they are incredible!” Brash remarked. And his team manager agreed. “I remember 1996, winning the Aga Khan Cup with Abbervail Dream, the sportsmanship of the crowd was incredible as we went toe to toe with the Irish!” she recalled.

There was a clear purpose to the British effort this week, and Holly Smith put it down to focus. “Everything panned out as we hoped which doesn’t always happen – so when it does you have to enjoy it!” she said this evening.

And with this pivotal victory under her belt, Di Lampard is now turning her sights on the Longines FEI European Championships later in the month. “Now we are really confident about going to Rotterdam and winning a medal and our place in Tokyo!!” she said.

Standings after Round 7 of the Longines FEI Jumping Nations Cup™ 2019 Europe Division 1 series: