Denmark’s Cathrin Dufour stole all the limelight when dominating both the Grand Prix and Freestyle at the first leg of the FEI Dressage World Cup™ 2019/2020 Western European League on home ground in Herning (DEN) this weekend. Riding her exciting young Westphalian gelding Bohemian, she posted a whopping 83.022 to win yesterday’s Grand Prix. And today she posted the winning Freestyle score of 88.191 which left her well clear of her nearest rivals, Germany’s Benjamin Wendl with Daily Mirror 9 and Helen Langehanenberg with Damsey FRH who slotted into second and third.

“It’s quite incredible!” said Dufour this evening, delighted with the performances of her super-talented and ultra-promising nine-year-old horse. “Yesterday was the highlight because he was super-brave in front of a full-on crowd and everything came together! And today he brought out his “A” game again – imagine what he can do when I start to push him a bit more – he’s going to be unbelievable!” she added. 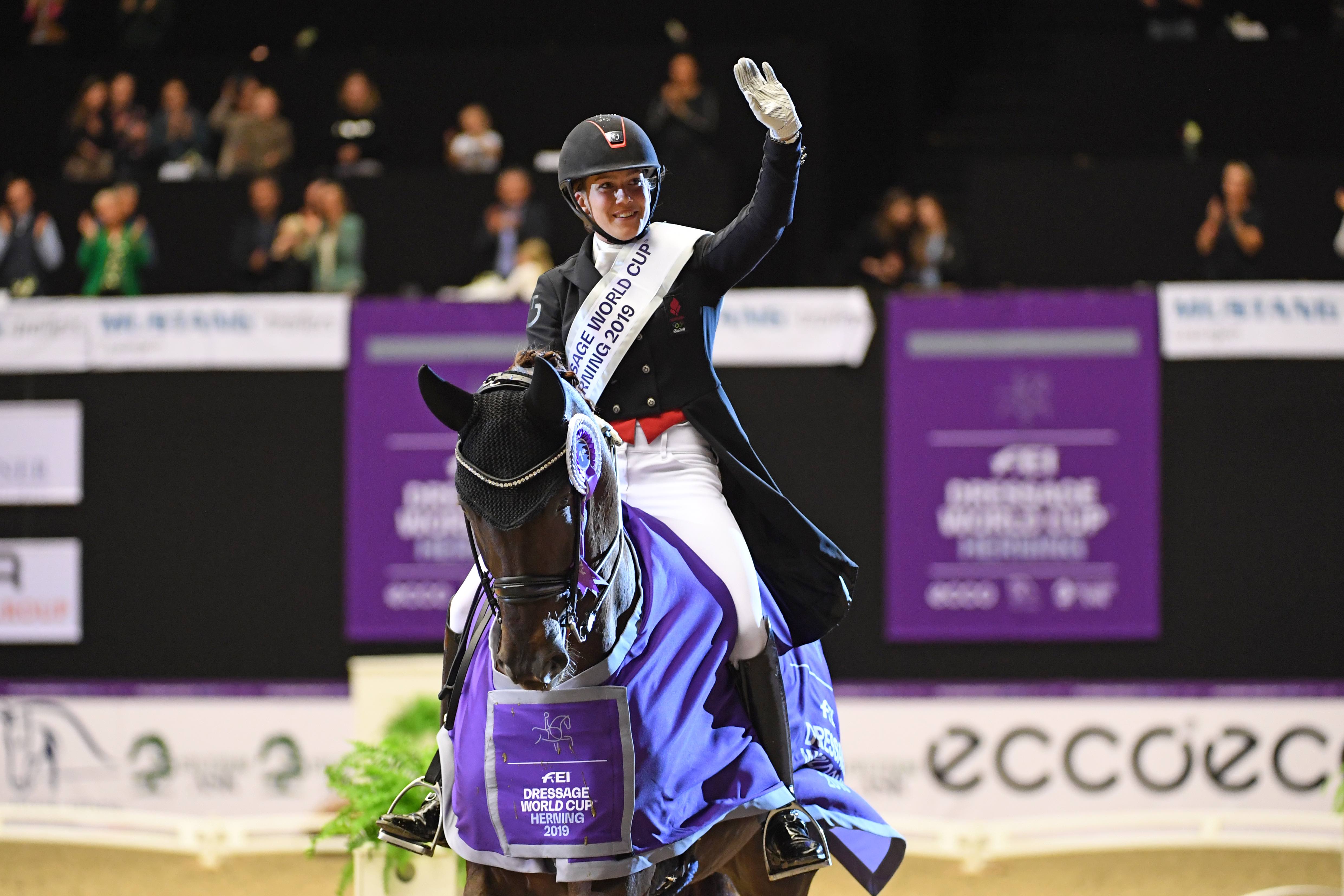 This first round of the 14-leg league from which nine riders will qualify for the FEI Dressage World Cup™ Final 2020 in Las Vegas (USA) next April, attracted a cracking field of 15 combinations from eight countries. And Denmark held the lead at the halfway stage when Agnete Kirk Thinggaard and Jojo AZ posted 77.630. It was a big moment for this pair as they were making their final appearance together at top level, with retirement now beckoning for the 16-year-old horse that represented Denmark at the Rio 2016 Olympic Games and helped secure team silver at the FEI European Championships in Gothenburg (SWE) the following year.

Last year’s Oslo winners, Daniel Bachmann Andersen and Blue Hors Zack, went out in front when first to produce a score over 80 percent, but Dufour blew that away when following with a mark of over 88 percent for a test that had the spectators on the edges of their seats. Bohemian finished fourth in the Freestyle and fifth in the Special as well as contributing to Denmark’s second-place finish in the team event at the prestigious German fixture in Aachen this summer. And the crowd rose to their feet again, just as they did yesterday, when the pair drew to a halt in the full knowledge that they had taken a significant lead.

Germany’s Werndl and Daily Mirror put 84.545 on the board before 2013 series champion Helen Langehanenberg posted a mark of 83.360 with Damsey FRH. So when the final partnership of Severo Jurado Lopez and another nine-year-old, Fiontini, finished fractionally further behind on 83.320, then the Spanish pair had to settle for fourth place.

As Dufour returned to the arena for the prize-giving there was a sense that a new champion has been born. The 27-year-old Danish rider’s career highlights have mostly been recorded in her partnership with the fabulous 16-year-old gelding Atterupgaard’s Cassidy who has carried her from Young Rider European gold to the Rio 2016 Olympic Games and on to team and Freestyle bronze at the 2017 Senior Europeans and bronze in the Special again at this summer’s European Championships. Bohemian looks like his perfect successor, and Dufour acknowledged that today.

She is much lauded for her effective but hugely sympathetic riding style which allows her horses to develop at their own pace. “They are my team-mates, and I respect them in the ring. If they say they can’t do something then I say ‘maybe next time’. I never push them and that gives them great confidence. I love my ponies, I’m really just a pony girl inside!!”, Dufour said this evening.

She is not going to try to qualify Bohemian for the Las Vegas 2020 Final, because she says it will be too much for him in a short space of time, especially when she has the 2020 Olympic Games in her sights. “I want to have both of them (Cassidy and Bohemian) ready for Tokyo. I’ve taken it quite easy on Bohemian to improve his frame and his strength, I’m just still trying to balance him. But the day I can start really riding him forward – I can only imagine what he can do!”