Kevin Babington had just had his hair cut when I spoke with him last week, and in these strange times that’s a cause for major celebration. Around the globe people have been prevented from keeping their curls under control due to pandemic lockdowns. But as the US-based Irish Olympian and 2001 European Jumping team gold medallist explained, the situation in Florida (USA) has recently returned to some kind of normality and it’s boom-time for hairdressers – “mine is booked solid for the next three weeks!”, he said with a laugh.

I had called to ask him about the sustainable bedding his company, Babington Mills, has been producing, and was reminded of his passion for animals, farming and the countryside. Kevin and his wife and family have been dealing with the aftermath of a life-changing fall sustained while competing last summer which has left him wheelchair-bound. But in a conversation just nine months later, you find that the man who hails from County Tipperary has his eyes firmly fixed on the future of his business, his rehab and his sport.

He tells me the idea of the bedding came across his radar when he found some bagged product in Germany a number of years ago. “I got this urge to bring it to America so I did a lot of research and bought machinery in Denmark where they produce quite a lot of it”, Kevin explains.

“While I was travelling I also came across different horse-feeds so I decided to create a version of forage feed myself, using grains from organic farmers. It was a big investment, but it’s a fantastic way to go for horses”, he insists.

His low-starch, low-sugar forage feed slows down intake and creates a lot more saliva which helps prevent gastric ulcers. “It’s good for the whole digestive tract because the horse takes longer to chew so it’s a buffer for ulcers. With pelleted or sweet feed they are inclined to gulp it down and you get a splashback effect”, he explains.

When it came to the bedding it took some time to refine his particular version, putting 800lb straw bales through a chopper, then running it through a hammer-mill which opens up the node of the straw and creates the soakage that sets it apart from the rest.

“Conventional straw has little soakage, but at the length we chop it then it’s like mucking out shavings”, Kevin says. “You have to start out with good quality straw with less than 10% moisture content. It’s so absorbent that it works almost like cat litter and it’s easier to find the droppings, you use a fraction of the amount of regular straw on your horse’s bed and we run it through a dust extractor so it’s really good for hypo-allergenic horses. The finished product is very clean”, he adds.

But are horses not inclined to eat their yummy bedding? “For some reason they are less likely to eat it than long straw. When you first put a horse in on it they might nibble at it but it won’t to do them any harm. The odd horse might eat it but they are grazing animals and sometimes hay gets mixed up with it, so nibbling all night is really good for them”, he points out.

And bedding has become the biggest part of the Babington Mills business now, expanding into supply for small animals like hamsters, rabbits and guinea pigs – “we use a smaller chop for them – it’s a bit of a different process and they live very happily on it”, Kevin adds.

The fact that Kevin feels good about keeping animals, big and small, happy and comfortable doesn’t come as any surprise to me. I recall the story his wife, Dianna, told while she was dealing with her own anguish following his accident last August in which she described her husband as “kind, above all things”.

Late one night some years ago they were driving home from their barn in a snow storm along barely passable back roads when they came across a deer that had been hit by a vehicle and left lying on the road with two broken legs. “Kevin approached her slowly, and put a blanket on her when he gained her trust. We stayed with her so she wouldn’t be hit again, and he talked to her and petted her while we waited for the police to come and humanely put her down”. That’s just one measure of the man whose personal popularity led to the most phenomenal and emotional response from the equestrian world in the aftermath of his fall.

Anyway, back to business…..and the Babington Mills Farm in Hamburg, Pennsylvania. “Deep down in my heart I always wanted to be a farmer!”, Kevin admits. “I had this great idea of buying a farm and growing my own hay and doing some wheat each year.

“We bought the farm just after the big crash in 2008 when we didn’t know what direction the horse world was going. It’s in a very remote, rural area and I’d love to be up there now, I enjoy it very much”, Kevin says. It was close to the family home at the time and he was very involved in the running of it in the early stages, but then the horse business got busy again so he got “a bit side-tracked”. The management of Babington Mills is now in the very capable hands of his sister-in-law Dawn Imperatore.

One of the aspects of the bedding production that pleases Kevin most is the fact that it is compostable. “We are surrounded by mushroom farmers and they are delighted to use it and you can also spread it directly onto fields because it breaks down quicker than conventional straw”. It sounds like a perfect example of circular bioeconomy, using renewable natural resources in a way that pleases the environment.

Early last year the family moved to a beautiful new facility in New Jersey which is closer for many of Kevin’s pupils and clients, and they now share their time between there and their Florida base.

Kevin loves teaching and is still doing it from his wheelchair wearing a headset and accompanied by his “bodyguards”, the family’s three Australian shepherds Dylan, Millie and his closest friend, three-year-old Delilah. But he misses riding, and that leads him to talk about his recovery programme. 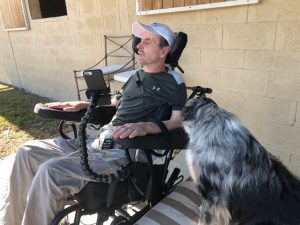 “I’m working hard on my rehab and now have a good bit of movement in my right arm, almost to the point where I can manage the wheelchair with my hand, and I have twinges in my legs which the doctors call a good spasm. The C3 and C4 vertebrae affect your diaphragm, and I was on a ventilator for quite some time at the beginning, I’m off that for months now so my voice and my lungs are getting stronger.

But it’s slow. I still have to deal with a fair amount of pain in the form of spasms, and unfortunately the physio practice I go to has been closed because of the virus but it opens back up on 1 June and I’m really looking forward to getting back into that. I ride a stand-bike every day to keep my muscle tone up and do lots of exercises working on my strength”, says Kevin who has also been using a hyperbaric oxygen chamber as part of his latest treatment.

We move on to talk about the great horse that put him on the international stage, the Irish-bred chestnut Carling King who he describes as a real character, very strong but definitely the horse of a lifetime. “We travelled the world together and my first Championship was in Arnhem (NED, where Ireland won European team gold in 2001), and my very first Nations Cup in Europe was Aachen (GER) so I was thrown right in at the deep end!

In recent years he remained prominent on the US circuit, and in early March this year he was appointed as one of three advisors to the Horse Sport Ireland High Performance Committee along with Taylor Vard and Cameron Hanley. With competition grinding to halt just a few weeks later he didn’t get the chance to share his expertise and wisdom, but when action resumes Kevin will undoubtedly make a great contribution to the Irish Jumping team in future years.

So how does he think equestrian sport will move on in the wake of the current pandemic? “Unfortunately a lot of shows were already just about managing to survive and some of those may not make it through this. It will be hard, and some of the vendors and smaller sponsors will be struggling. Once things start to reopen – as long as we don’t have a second wave of the virus – the sport should bounce back, but there’ll be changes for sure.

“But we’ll get through this, it’s a bump in the road but our sport was generally in a healthy place before this happened, and it will turn the corner. Everyone wants it to….”