With competition on hold due to the pandemic, this week the FEI launches a brand new series of interviews and stories. First up, one of the best-known Press Officers on the international circuit, Classic Communications’ Marty Bauman, recalls some of his personal memories of FEI World Cup Finals™ in the USA…..

In the normal course of events, the full focus of the equestrian sports world should be on the Longines FEI Jumping World Cup™ and FEI Dressage World Cup™ 2020 Finals which were due to kick off at the Thomas & Mack Centre in Las Vegas last Wednesday (15 April). This would have been the tenth Jumping Final and the sixth Dressage Final to be staged in America, and there was a lot hanging in the balance as World No. 1 riders Steve Guerdat from Switzerland and Germany’s Isabell Werth were also chasing new records.

Steve should have been bidding to become the first-ever four-time champion in the 41-year history of the hugely popular Jumping series, while Isabell was set to seal her fourth consecutive victory with Weihegold, and her sixth in total as the 35th Dressage season drew to a close.

But nothing in the world is normal right now…. 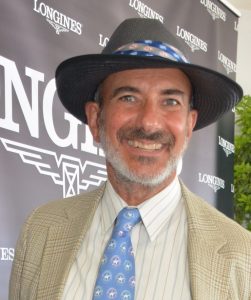 “When you think that this week we should be together in Las Vegas, and next Monday I should be flying directly to Lexington for Eventing – my biggest two weeks of the year – but instead I’m sitting at home driving Nancy (his wife) crazy!” says Boston-based Marty whose equestrian connection dates all the way back to the American Jumping Derby in Newport, Rhode Island in 1978 where he worked with Mason Phelps.

Marty’s natural gift for event management and PR saw him become Director of Public Relations with the USET from 1990 to 2004, and he has been Press Officer for multiple major events including eight of those FEI World Cup™ Finals staged in the US.

His first was in Tampa, Florida in 1989 which attracted a large contingent of European media including the legendary Alan Smith from The Daily Telegraph in London who, as Marty recalls quite correctly, “never went anywhere on his own, he was always escorted by his entourage!”

The event was staged in a small exhibition arena at the Florida State Fairgrounds where another of the sport’s legends, Gene Mische, had been successfully staging horse shows for some time. “Gene was the ultimate promoter, he did more for showjumping in this country than anybody”, Marty says. Nine years earlier the second annual FEI Jumping World Cup™ Final had taken place in Baltimore, Maryland, and Gene had been successful in his bid to bring it back to American soil once again. The 6,000-seater Tampa stadium sold out, and the stellar field included the defending champions from Canada, Ian Millar and Big Ben, and Great Britain’s John Whitaker with his magical grey, Milton.

Marty recalls Ian and Big Ben waiting at the in-gate before the Final round. “It was the first World Cup Final for myself and show manager David Distler, and it hadn’t been easy for us. But I remember Ian turning to David and saying “you think you have a lot of pressure on you – just imagine what I’m feeling right now!!” As the history-books show however the great Canadian partnership pipped the British duo to become the first back-to-back FEI Jumping World Cup™ champions.

“Del Mar in 1992 was spectacular!” says Marty. According to the rule-book all Finals should be held indoors but the weather in the San Diego area was never likely to threaten so, on this one occasion only, it took place in an outdoor arena covered by giant netting so that technically there was a roof in place.

The late John Quirke played a major role in bringing the event to California, enthusiastically supported by Del Mar’s Brooks Parry and the man who created the whole concept of FEI World Cup Jumping, Max Amman.

Great Britain’s Tina Cassan was at the centre of a major stand-off when, during the first leg, she noticed the timers already registered 20 seconds as she began her round over Linda Allen’s course. She pulled up and refused to continue until the clock was restarted, and although the crowd noisily took her side she was eventually eliminated. After a seris of intense meetings before both she, and Germany’s Ludger Beerbaum who was similarly affected, were both reinstated by the Appeals Committee. Ludger celebrated by winning the second leg and Tina eventually finished eighth, while Austria’s Thomas Fruhmann and Genius jumped fault-free to take the title.

Marty recalls the tension. “Raymond Brooks-Ward supported Tina throughout the whole controversy and there was a lot of pressure on me because the media wanted answers – and they wanted them now! But in the end it was worked out, and Thomas was a great winner!”.

And then John Quirke came up with an even bigger idea – bringing the Finals to Las Vegas. “He was a real mover and shaker and very good at convincing people of the merits of his great ideas”, Marty explains. “John said – we’re in the business of entertainment and where’s the entertainment capital of the world? Let’s bring our sport into the 21st century! He wanted to present the sport like it had never been presented before, and in 2000 he made it happen – laser light shows, rock music, fireworks, opening acts, Elvis impersonators and showjumping – it had everything, and the crowds just loved it!”

Brazil’s Rodrigo Pessoa and Baloubet du Rouet were chasing down their third consecutive title, but hope seem to be shattered when the stallion had a fever on arrival at the show. However Baloubet bounced back and the three-peat became a reality when the pair pinned Switzerland’s Markus Fuchs and Tinka’s Boy into runner-up spot on the final day.

Pessoa and Baloubet surely hold the most extraordinary record in the history of the FEI Jumping World Cup™. They went on to finish runners-up in 2001, third in 2002 and second again when the Final returned to Las Vegas in 2003 where Germany’s Marcus Ehning posted the first of his three wins.

Five years later even more history was made when, for the very first time, the FEI Jumping and Dressage World Cup™ Finals were staged together in Vegas. “It was a spectacular programme in 2005 with day and evening sessions, we sold tickets in all 50 States and 30-odd countries and the Dressage Freestyle Final on that Saturday night was incredible! When Debbie McDonald and Brentina performed to Motown and Soul music the arena was electrified, and when they came down the final line to Aretha Franklin singing “Respect” the crowd got to their feet and went wild! That night changed Dressage forever, and I’m not sure it could have happened anywhere other than Vegas!” Marty says.

The American pair finished third while Anky van Grunsven came away with the win on Salinero. This was the seventh of nine series victories for the Dutch superstar who created an even more headlines when marrying partner Sjef Janssen in a Vegas wedding chapel that weekend, with “Elvis” conducting the ceremony.

In Jumping Meredith Michaels-Beerbaum posted the first of her three wins with Shutterfly that year, but back in Las Vegas two years later she took a surprise fall when seriously in contention on the final day and it was Switzerland’s Beat Mandli who reigned supreme with Ideo du Thot. And, 15 years after she first stood top of the podium in Gothenburg (SWE) in 1992, Germany’s Isabell Werth won the 2007 Dressage title with Warum Nicht, pinning The Netherlands’ Imke Schellekens-Bartels into second and America’s Steffen Peters into third.

In 2009 Steffen became only the second American ever to win the FEI Dressage World Cup™, setting the Vegas arena alight with a brilliant ride on Ravel. Meredith and Shutterfly topped the Jumping podium for the third time in their career, and then there was a six-year break before the dual Finals returned to Las Vegas once more.

Great Britain’s Charlotte Dujardin and the wonderful Valegro were still riding their wave of record-breaking success as they swept to take the 2015 Dressage title, while in Jumping, Switzerland’s Steve Guerdat claimed his first victory riding Paille. But the story Marty remembers best from this edition was about young Irishman Bertram Allen.

“On the Wednesday night we had the Welcome Reception and Draw in a Club, and they wouldn’t let him in because he was under-age – he was only 19. I had to plead with the club-owners to let him in, so they agreed provided we put a security guard by his side all night to make sure he didn’t drink alcohol. The legal age in the US is 21!”

But young Bertram had his revenge, winning the first leg with Molly Malone and eventually lining up third at the end of a truly thrilling competition.

Omaha in Nebraska became a brand new US venue for the joint-finals in 2017 and the home crowd enjoyed every moment when firm favourite, McLain Ward, won the Jumping title he’d been craving for over 25 years. The spectators stayed on to share the prize-giving ceremony with him and his brilliant mare HH Azur who never touched a pole all week. “The feeling around the arena was amazing, everyone was so happy for McLain, and so proud of him!”, Marty says.

In Dressage, Isabell Werth scored the first of her three consecutive wins with Weihegold, and when the action was due to return to Las Vegas this week it looked set to be another nail-biter, with Charlotte Dujardin and her new star ride Mount St John Freestyle ready to get in the way of Isabell’s four-in-a-row if she could.

The Thomas and Mack arena had a $75m makeover in the lead-up to the cancelled 2020 Finals including improved seating, a new sound system, new video boards and lighting. “The new VIP area is a giant ballroom with one whole wall of glass from floor to ceiling facing the Strip. There’s an outdoor balcony and it would have been truly magnificent” says Marty who, like everyone else, is really disappointed the event is not now taking place.

But the FEI World Cup™ Finals are set to return to Omaha in 2023 and that’s where his sights are focused now. “It’s such a great venue and we can really look forward to that. And then maybe we’ll get back to Vegas soon again too!”