Every season the Longines FEI Jumping World Cup™ series throws up some exciting new talent, and today 25-year-old Richard Vogel and the 10-year-old stallion United Touch S wowed their home crowd with a superb win in the fifth leg of the 2022/2023 Western European League in Stuttgart (GER).

Taking on a stellar field of opponents in a tense and thrilling 13-horse jump-off, the pair who were both making their debut at this level of the sport set an impossible target with a sensational run that left them well over a second quicker than their nearest rivals.

Ireland’s Denis Lynch and Switzerland’s Steve Guerdat shared runner-up spot at the end of the day while world number one and reigning world champion, Sweden’s Henrik von Eckermann, finished fourth ahead of The Netherlands’ Harrie Smolders in fifth and Frenchman Kevin Staut in sixth place.

It was a day when many young horses really rose to the challenge, but Vogel’s victory was all the more impressive for the fact that this was only his fourth show with his winning horse.

Course designer, Germany’s Christa Jung, set a strong 13-fence first-round test, but one-third of the starters made the cut into the jump-off and it was Britain’s Harry Charles who led the way with Casquo Blue who left a single rail on the floor this time out.

Kevin Staut was clear when next to go with Visconti du Telman and their time of 37.90 seconds set the early target. Sweden’s Wilma Hellstrom has been really making a name for herself over the last year and also left all the poles in place with the lovely one-eyed grey mare Cicci BJN but didn’t challenge for the lead when clearing the line in 41.13.

Germany’s Jana Wargers came much closer when galloping through the timers fault-free with Limbridge in 37.92 seconds, while her compatriot Hans-Dieter Dreher’s time of 38.75 with the magnificent 10-year-old grey Elysium was also short of the mark. But Vogel’s was not.

Sixth to go he set off at warp speed, making a heart-stoppingly tight rollback to the big wall which was now the third fence and galloping relentlessly down to the two remaining elements of the triple combination before racing to the last to reset the target at 35.35 seconds. And that proved impossible for the rest to match. 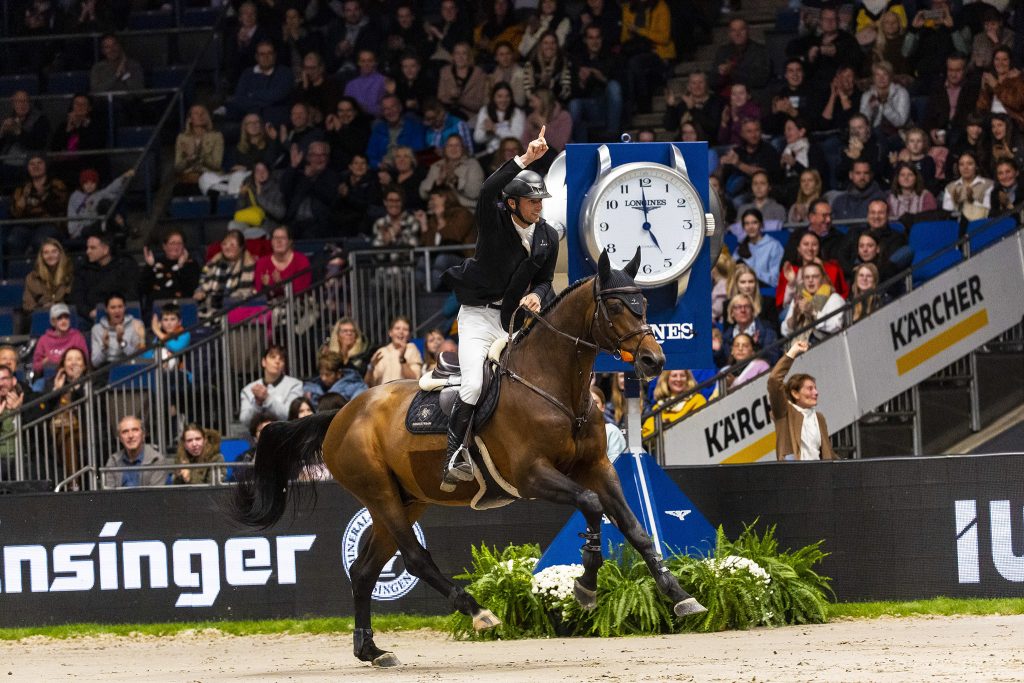 Von Eckermann gave it his best shot with his lovely nine-year-old mare Iliana who crossed the line clear in 37.03, but Germany’s Marcus Ehning slipped out of contention when Priam du Roset hit the second fence while Jur Vrieling’s Long John Silver 3 ducked out when asked for a tight turn to the imposing wall which put paid to their chances. Fellow Dutchman Willem Greve’s Grandorado TN NOP knocked a brick out of the wall and then there were just three left to go. But they couldn’t dislodge Vogel from his perch.

Denis Lynch’s Brooklyn Heights is a super-fast little horse but when the clock showed 36.80 seconds he wouldn’t oust the leader and when Steve Guerdat’s exciting nine-year-old mare Dynamix de Belheme crossed the line in exactly the same time then only The Netherlands’ Harrie Smolders was left to make one final challenge. Despite an extraordinary effort when taking the wall at an acute angle however his time of 37.86 with Bingo du Parc would leave him fifth in the final analysis while the crowd went wild with delight at a home win.

Previously ridden by The Netherlands’ Bart Bless, Vogel has only been riding United Touch S for the last few months but he wasn’t the least bit intimidated when given the opportunity to compete the horse in their first World Cup together.

“I tried to just pretend it was like any other class and do everything the same. He’s a very brave horse, he always tries his best for the rider and has a lot of scope and is not spooky at all so I knew I could turn very tight to the wall”, he explained. And the stallion’s enormous stride gave him the edge in the end.

“I did fences one to two in six strides which a few colleagues said was not possible – but he has probably one of the biggest strides in the world!”, said the man who works alongside top German rider David Will at a shared based in Dagobertshausen, north of Frankfurt. Also in the business is Vogel’s girlfriend Sophie Hinners who finished second in the German Masters at Stuttgart on Friday. “We are a very strong team of three very strong riders!”, Vogel pointed out.

Victory today was very sweet, but it has thrown Vogel’s plans into a bit of chaos.

“To be honest I was very last-minute getting in here (entry to Stuttgart) so I was already very happy just to get the chance to ride in one World Cup qualifier but I never planned to do a whole season. The original plan was for my horses to fly to America next week, but now we have to see if I keep one or two here in Europe and try to do one or two more shows – I just don’t know yet. First we go home, get settled and we’ll take it from there!!”, he said.

For joint-runner-up Steve Guerdat it’s a different matter however. The three-time series champion has contested 14 FEI World Cup™ Finals during his super-successful career and has competed in all five legs of the new season, but only picking up his first points today towards qualification for the 2023 Final in Omaha, USA next April. With 16 points he’s now well on the way.

He was thrilled with the performance of Dynamix de Belheme today and said this evening that he may take her to London in December for the eighth qualifying leg of the Western European League series. But before that he plans to take other horses to rounds six and seven which will both be staged in Spain.

Next stop is Madrid in two weeks’ time, so don’t miss a hoofbeat…..

For all the latest information about the LONGINES FEI Jumping World Cup™ season 2022/2023 check out the new Series Hub HERE https://www.fei.org/series/fei-jumping-world-cup-2022-2023

Stay up-to-date with articles, interviews, videos and much more while following the action all the way to the Final.